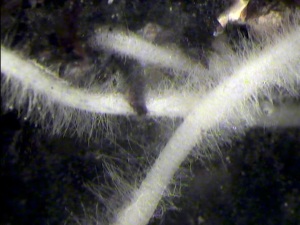 We have developed this method in Diane Rowland’s lab. Root hairs are notoriously difficult and input intensive to study.  This method uses selections of digital images with root hairs, such as those taken using mini-rhizotrons.  First we determine root hair density, then project density on the selection area to determine an equivalent root hair area.  The method is described in this abstract to be presented at the meeting of the International Society of Root Research in October in Sydney Australia.  We hope that this method will allow future researchers to include root hairs in their research into root dynamics in the field.

OJIP is quickly becoming a standard in ecophysiological investigations, because it is rapid and yields a great deal of information about the constantly fluctuating photochemical structure of the leaf.  Based on optical acoustics of biomembranes, OJIP analysis, uses a high resolution (microseconds) trace of the rise in chlorophyll fluorescence, to trace the movement of energy through the first steps of the photosynthetic electron transport chain.  Because it yield a large number of potential variables, OJIP can be daunting at first.  However, it can yield important and valuable information about how leaves acclimate to shifts in their environment, as in this paper.

Gas exchange is the standby for ecophysiological investigation.  It can be used to assess photosynthesis under differing treatments or conditions.  Light curves and A/Ci curves can be used to delve deeper into the photosynthetic capacity of plants, including limitations by stomata and by various enzymes in the “dark reactions” of photosynthesis. Adding chlorophyll fluorescence can integrate our picture of the light and dark reactions, giving us a more complete understanding of photosynthetic energy flow.

Photospectrometric methods to quantify Chlorophylls a and b and total carotenoids.

High performance liquid chromatography to quantify Chlorophylls a and b and to separate carotenoids into the more abundant components: lutein, zeaxanthin, violaxanthin, antheraxanthin, and β-carotein.