Huanglongbing (HLB; “citrus greening disease”) is currently the biggest threat to the Florida citrus industry. HLB has caused declines in citrus production and has infected trees at a rate of 100%. Insecticides reduce Asian citrus psyllid, the pest that transmits HLB, but they don’t prevent more psyllids from moving into the planting, and they often kill the pest after transmission. This is why growers need non-insecticidal prevention options. One of these options is to apply kaolin particle films on trees to help manage psyllids.

Kaolin particle films cover the natural color of the plants, which is what ACP are attracted to. White kaolin was already known to reduce ACP, but this study tested whether red kaolin may also help mitigate ACP. ACP are attracted to the blue and ultraviolet light in the leaves and red was thought to further reduce this. We made the kaolin red by taking naturally white kaolin and mixing in a dye and a binding agent, resulting in a pinkish color.

This field study tested the effect red and white kaolin particles had on ACP pressure over the course of two years. The particles were added to the leaves of young non-bearing Hamlin trees. Another set of trees were treated with foliar insecticide and one control set received no treatments.

Overall, trees with red kaolin had the lowest number of ACP. Trees with white kaolin had less than the trees with foliar insecticide. The control trees had the most ACP. Important to note, none of the kaolin treatments completely prevented ACP from infecting trees but merely slowed the infection down. The onset was slower in red trees than white. These findings indicate that kaolin particle films may be an alternative pest management to foliar insecticides when it comes to reducing ACP and slowing HLB infection. 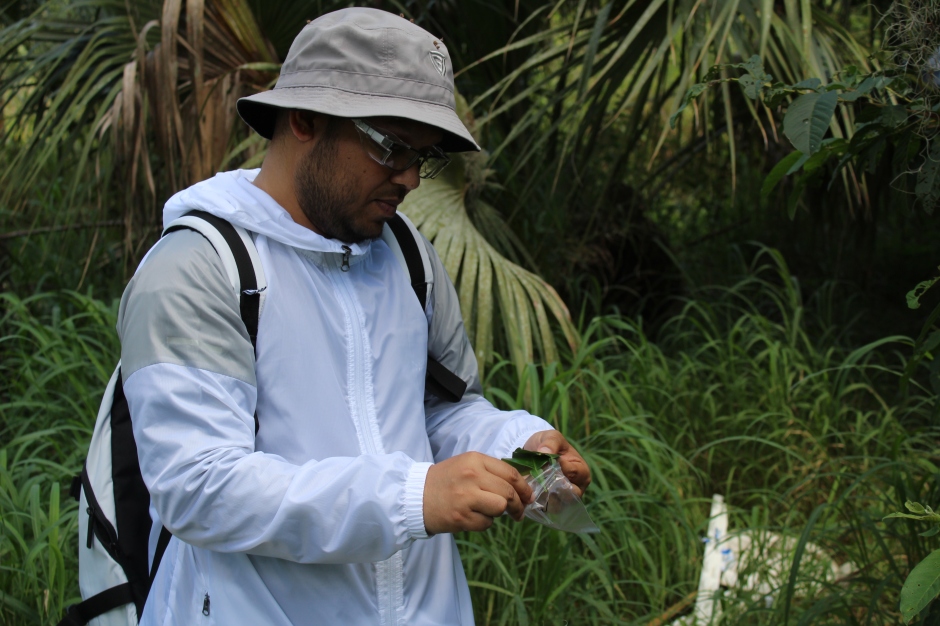 Trees provide shade, but have you ever considered trees themselves needing shade? Our lab is seeking to answer this question. Anirban Guha, who is leading this effort in our lab, was able to sit down with me and answer some questions about the experiment. He joined the lab in April 2019 as a post-doctoral scholar. The experiment is attempting to determine how the trees respond to different light conditions over a period of two to three years with the use of shade nets to manipulate the environmental conditions. The lab records daily, weekly, and monthly results, and will record the yearly results when the time comes. We already know that citrus responds better in partial shade conditions, which improve yield and yield quality and photosynthesis and water status. We think that full sun has an especially bad effect on HLB trees. Anirban explained that the infected plants often cannot take in the full force of Florida sunlight; it provides them with more energy than they have the capacity to process. HLB also stunts root growth, which becomes even more of a problem when high light conditions demand more water and nitrogen than can be taken up by the roots.

The lab is testing whether shading the trees allows them to conserve more energy and require less water and nitrogen, which would help balance their functioning with the disease. Ultimately, the goal is to “[develop an] agricultural system in a way that could modify the environmental cues, and that can lead to better fitness of the plant to help sustain yield and maintain better physical performance.”

The main recipients of this experiment are scientists and citrus growers; Anirban thinks these two groups believe they have different reasons for caring about the results, but he believes their goals are actually similar and the knowledge they seek is complementary. Whether results are sought for economic reasons or a research quest, the ultimate goal is to see the trees become healthier and create more fruit yield—something both the scientific and agricultural communities can agree upon.

Anirban takes this collaborative approach in his work life as well. The physiology lab collaborates with other CREC labs to study and test infected trees. Their results often work together to create healthier trees. For example, the entomology lab provides information on how insects spread HLB. He desires for more scientists of different disciplines to work together to achieve “functional collaborative research,” which can help the scientific community locally and worldwide. Along with scientists working together to achieve more, he also wants his research to be holistic. He wanted to study trees not just at a cellular level, but “from leaf to whole plant.” After completing his PhD in India, he found the majority of opportunities available there were for study at the cellular level. Anirban was interested in more variety and didn’t want to do what everyone else was doing. He also saw this gap in research as something he could potentially fill back home one day. He believes the study of the whole tree is important because problems tend to be linked to one another and can be better understood when a whole plant approach is taken. He enjoys his work but told me with a good-natured smile that he is not at all attached to the state of Florida and would like to return to India one day.

What do citrus trees look like after 2 years of coverage with white and red-dyed kaolin? See for yourself!

Next week week have a presentation of actual data of results with growth, insect populations, and HLB infection status.